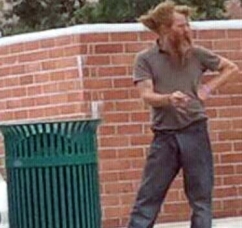 An arrest that ended in the death of a mentally ill homeless man in Fullerton has many residents outraged and city officials looking for answers. At about 8:30 p.m. on the night of July 5, Fullerton police officers responded to reports that a man was trying to get into cars parked near a bus depot.

The suspect was described as a homeless man with long hair and no shirt carrying a backpack, police said. When officers arrived at the scene, they found 37-year-old Kelly Thomas, a schizophrenic homeless man who had become a fixture in downtown Fullerton and surrounding cities.

What happened next has Thomas’ family, acquaintances and much of the city outraged. Police said Thomas tried to run after officers searched his backpack and found items that weren’t his.

One took video of the confrontation, a graphic, two-minute clip that has since circulated the Internet.

In the video (caution: contains strong language), Thomas can be heard screaming over the clicking sounds of the Taser. Bystanders also offer a commentary of the scene unfolding before their eyes.