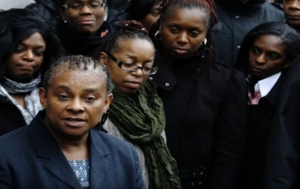 Stephen Lawrence’s mother, Doreen, said the convictions of Gary Dobson and David Norris for the murder of her son were not a cause for celebration, saying “How can I celebrate when my son lies buried?” Speaking outside the Old Bailey in central London, Mrs Lawrence was critical of the original Scotland Yard investigation into Stephen’s death in 1993, saying: “Had the police done their job properly, I would have spent the last 18 years grieving for my son rather than fighting to get his killers to court.”

The victim’s father, Neville, said he was “full of joy and relief that two of my son’s killers had been convicted” as a statement was read out by his solicitors.

Mr Lawrence said he was conscious there were five or six attackers that night and that he didn’t think he would “be able to rest until they are brought to justice”.

Stephen Lawrence’s friend Duwayne Brooks, who was with him when he was killed, welcomed the verdicts, writing on Twitter: “Some JUSTICE at last.”

David Cameron said: “In the 19 years since his murder, Stephen Lawrence’s family has fought tirelessly for justice. Today’s verdict cannot ease the pain of losing a son. But, for Doreen and Neville Lawrence, I hope that it brings at least some comfort after their years of struggle.”